To Eat or Not to Eat … Organic!
Have you ever stood in the produce section at the grocery store, wondering if those organic blueberries are really worth the extra $2? If so, you’re not alone. Many consumers have questions about organic foods. Others just have general concerns about the presence of pesticides in our food, or the health impact of genetically modified foods (GMO’s).

What Does Organic Mean, and Why Does It Matter?

The United States Department of Agriculture (USDA) defines what qualifies foods as organic here, but to summarize, in order for a food to be classified as organic, it must follow strict production standards with seed sourcing, soil quality, pest and weed management, and the use of additives. As it relates to producing items, organic farming standards require minimal use of synthetic pesticides.

In addition to the USDA organic label, you have probably seen the labels indicating “No GMOs.” GMO stands for the genetically modified organism. This indicates that the genetic material (DNA) of the seed has been altered in a way to promote a more favorable trait in that plant, resulting in, for example, a natural resistance to pests (and thus less dependence on pesticides.) Consumer skepticism and aversion to GMOs are prevalent, though safety concerns have not been verified in the research. But lack of proof of harm is not the same as proof of safety. GMOs made their debut in 1996, so high-quality, long-term studies on the health impacts of GMOs are in short supply. That said, what’s been done so far does not indicate that GMOs are harmful to human health.

The Case for Transparency

While certified organic foods are labeled accordingly, not all genetically modified foods are labeled as such. Whether you’re pro-GMO, anti-GMO or just neutral on the subject, most agree that having more transparency around this is important. Consumers deserve to be informed. Currently, it is not required that GMOs be labeled as such, so if you want to avoid them at all costs, one workaround is to buy USDA-certified organic foods. By definition, organic food cannot be genetically modified.

First and foremost, let’s set the record straight: eating more fruits and vegetables is associated with multiple health benefits and disease prevention, regardless of whether or not they’re organic. Nutritionally, there is no difference between conventional and organic produce – the vitamin C, fiber, potassium and basic vitamins and mineral composition are essentially the same.

If pesticides are something you’re concerned about, check out the dirty dozen. Every year, the Environmental Working Group (EWG) releases the “Dirty Dozen” and the “Clean Fifteen.” These lists are intended to guide consumers in a more informed direction with organic produce. The dirty dozen ranks produce items that have the highest amounts of pesticide residue – so if you’re going to go organic, these are the items worth paying up for. The clean fifteen have very low levels of pesticide residue. For most of the clean fifteen, the edible portion of the food is protected by a peel or rind, so unless you eat your banana peels or melon rinds – these foods aren’t worth buying organic.

While it takes many years to get good quality, long-term research on this, what has been done so far says if you can’t spring for organic, don’t sweat it. One study showed that opting for organic fruits and vegetables over conventional didn’t result in any decreased risk for consumers. (4) The USDA’s Pesticide Data Program report, which examines pesticide residues on produce, noted that 99% of the foods Americans are consuming have pesticide residues that fall well within the range that the Environmental Protection Agency (EPA) considers being safe (4).

In other words, don’t let a fear of pesticides get in the way of you and your much-needed, protective and disease-fighting fruits and vegetables! Just wash your produce well and enjoy. But if you want to go organic to avoid GMOs and pesticides (or for environmental reasons), there’s absolutely no harm in that.

Sarah McDougal is a registered dietitian and the manager of the health coaching program at CareATC. In addition to managing coaches, Sarah creates and edits wellness content that is used in the CareATC coaching program. Sarah is passionate about wellness, health promotion and preventative medicine and she fully believes in the power of food as medicine! When she’s not at work, Sarah is likely spending time with her family, cooking, honing her amateur gardening skills, running, or stretching on her yoga mat. 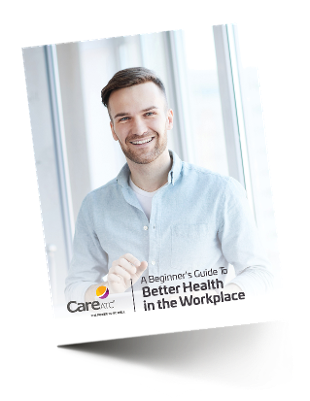